More about Eileen Cronin can be found on Amazon’s author page or GoodReads.

Eileen Cronin grew up in Cincinnati during the 1960s and 70s, when television was still new and children used their imaginations to create games, plays, and other entertainment. Her family, with its eleven athletic and engaging kids, lived in a neighborhood packed with other Catholic families. As Eileen was a middle child, she learned quickly that she needed to compete for a place in the crowd. This task was complicated by the fact that she was born, inexplicably, with legs that ended at about the knee. 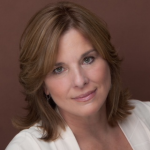 In grade school she enjoyed team sports but she soon abandoned any hopes of becoming an athletic superstar. Instead she invested her dreams in artistic endeavors. After ruling out a career as a ballerina, Eileen found her place among friends in an all-girl Catholic high school with whom she enjoyed parties, dating, and inventing pranks. Her favorite memories include skinny dipping on summer nights with girlfriends and imagining herself an elusive mermaid.

Through poetry and short story writing, Eileen found her voice. At twenty six she published a cover story for the Sunday Outlook section of the Washington Post. The story was sold to papers around the country and Eileen was faced with what might have become instant celebrity as a “thalidomide baby” on talk shows. She found that a patronizing role. Aside from that, she lacked proof of the involvement of thalidomide in her background. Her mother denied having taken such a pill. This was a critical point in Eileen’s life. As a young newlywed, she worried that her differences were caused by a mutation. Thus began a new chapter in her life as the researcher of her own medical history. This role fostered her enthusiasm for a career as a clinical psychologist. After achieving her professional goals, Eileen started a family. She continued to write short stories and draft novels, several of which were published in literary magazines. Her novels-in-progress were finalists in the Pirate’s Alley Faulkner Society’s competitions. She won the Washington Writing Prize in short fiction. Finally she returned to personal essays, one of which became a notable essay in Best American Essays. In her debut memoir Mermaid, we witness Cronin’s struggles through “the eyes of a mermaid.”

18 thoughts on “About Eileen Cronin”

This site uses Akismet to reduce spam. Learn how your comment data is processed.